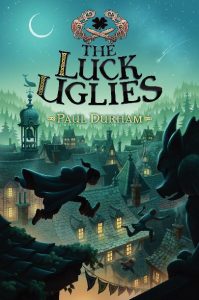 The first in a tween fantasy adventure trilogy that has legends coming to life, a charming wit, and a fantastic cast of characters. Rye O’Chanter has seen a lot of strange things happen in Village Drowning. She and her friends have grown up on Drowning’s treacherous streets, but now, a terrifying encounter on the night of the Black Moon has Rye convinced that the monstrous, supposedly extinct Bog Noblins have returned. There’s nobody left who can protect the village. There was once—an exiled secret society so notorious that its name can’t be spoken out loud. The Luck Uglies. As Rye dives into Village Drowning’s maze of secrets, rules, and lies, she begins to question everything she’s been told about the village’s legends of outlaws and beasts . . . and what she’ll discover is that it may take a villain to save them from the monsters.