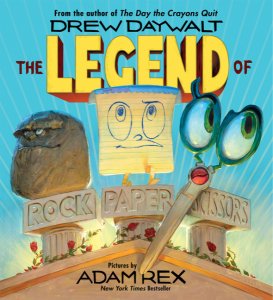 The Legend of Rock Paper Scissors

From New York Times bestselling creators Drew Daywalt, author of The Day the Crayons Quit and The Day the Crayons Came Home, and Adam Rex, author-illustrator of Frankenstein Makes a Sandwich, comes a laugh-out-loud hilarious picture book about the epic tale of the classic game Rock, Paper, Scissors.

You’ve played the game. Now read the legend of how it all began . . .

Long ago, in an ancient and distant realm called the Kingdom of Backyard, there lived a warrior named ROCK.

Meanwhile in the Empire of Mom’s Home Office, a second great warrior sought the glory of battle. And his name was PAPER.

At the same time, in the Kitchen Realm, in the tiny village of Junk Drawer, lived a third warrior. They called her SCISSORS.

These three were the strongest, smartest, and fastest in all the land. Time and again they beat the most fearsome opponents they could find: an apricot, a computer printer—even frozen, breaded, dinosaur-shaped chicken nuggets! But when the warriors finally meet each other, the most epic round of battles begins . . . and never ends. That is why, to this day, children around the world honor these worthy adversaries by playing ROCK, PAPER, SCISSORS!