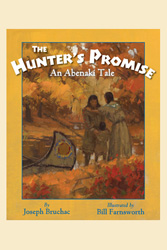 The Hunter’s Promise: An Abenaki Tale

“Promise to remember me,” said his mysterious wife. How could he forget her? There was something magical about her and their children. In the winter they had appeared as if from nowhere. However, in the spring they would not return to his village with him. Now the jealous chief’s daughter had cast a spell on him and he had forgotten them. Will the loyal hunter be able to break the spell of the evil chief’s daughter? Find out in this intriguing Abenaki tale about family, loyalty and keeping promises even under difficult circumstances.