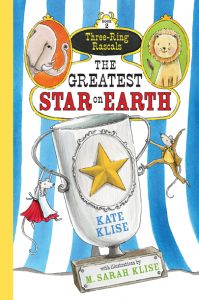 Everyone knows Sir Sidney’s Circus is the best in the world. But who’s the star of the show? The Circus Times is having a contest to find out. Just thinking about it gives Sir Sidney a worrywart, and it’s quickly clear why. Soon after he goes off to rest, the performers start thinking too much about winning the trophy and not enough about putting on a good show.
Meanwhile, it looks as if ringmaster-in-training Barnabas Brambles might need some help managing the crew, so Bert and Gert, the sly brother-and-sister mice who travel with the show, set out to write a book to teach him how it’s done.
Does Bert and Gert’s plan work? And who is the star of the circus? All will be revealed in The Greatest Star on Earth.