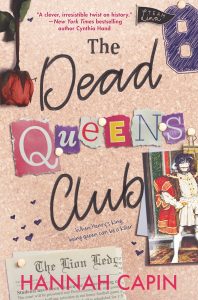 What do a future ambassador, an overly ambitious Francophile, a hospital-volunteering Girl Scout, the new girl from Cleveland, the junior cheer captain, and the vice president of the debate club have in common? It sounds like the ridiculously long lead-up to an astoundingly absurd punchline, right? Except it’s not. Well, unless my life is the joke, which is kind of starting to look like a possibility given how beyond soap opera it’s been since I moved to Lancaster. But anyway, here’s your answer: we’ve all had the questionable privilege of going out with Lancaster High School’s de facto king. Otherwise known as my best friend. Otherwise known as the reason I’ve already helped steal a car, a jet ski, and one hundred spray-painted water bottles when it’s not even Christmas break yet. Otherwise known as Henry. Jersey number 8.

Meet Cleves. Girlfriend number four and the narrator of The Dead Queens Club, a young adult retelling of Henry VIII and his six wives. Cleves is the only girlfriend to come out of her relationship with Henry unscathed—but most breakups are messy, right? And sometimes tragic accidents happen…twice…