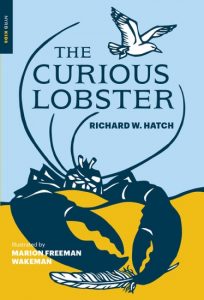 Whether you are five or one hundred and five, chances are you’ve never met a lobster as learned and charming as Mr. Lobster—and he’d be the very first to tell you so. Mr. Lobster has evaded the fisherman’s trap for decades, but life in his corner of the ocean seems duller by the day. The time has come to seek new adventures, new friends, and even—gasp!—new, dry lands. Dry land is of course perilous for a saltwater-dwelling creature, as are the folks you can meet there, like badgers, bears, birds, and snakes. But Mr. Lobster has a way of turning every enemy into a dear friend and of escaping the scrapes his curiosity gets him into.

An American Wind in the Willows, The Curious Lobster stories have been delighting a small and devoted fellowship of readers for going on eighty years. Sweet but not cloying, instructive but not didactic, they acknowledge the challenges of getting along with others and celebrate the possibilities of a life lived beyond the normal swim of things. This edition collects all of Richard W. Hatch’s Mr. Lobster stories, originally published in two volumes The Curious Lobster and The Curious Lobster’s Island.