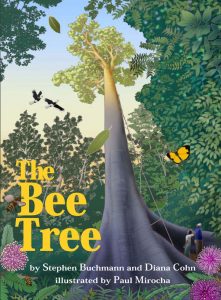 The Bee Tree is a picture book that tells the magical story of a honey hunt in the dense rainforest of Malaysia. The story is narrated by Nizam, a young boy whose grandfather Pak Teh is the leader of the honey hunting clan, the one who has the honor of climbing up the 120-foot tualang tree in the annual honey hunt. But Pak Teh is getting older and is now ready to prepare someone to take his place. He believes that Nizam is the one. On the first moonless night in October, Nizam and Pak Teh and the other honey hunters enter the dark rainforest. Pak Teh prepares for the hunt with a prayer and a traditional story. Then he begins to climb and Nizam follows. At the top, they use the honey hunters’ secret to keep from being stung, while their clansmen below soothe the bees with chanting. After a week of gathering honey in the nights, the clan returns home to celebrate their harvest. At this feast, Pak Teh announces that Nizam will be his successor.