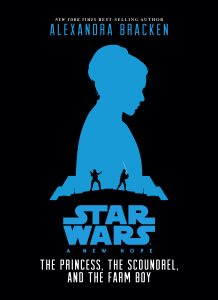 Star Wars: A New Hope: The princess, The Scoundrel and The Farm Boy

Although the Rebel Alliance has won a few battles against the Empire, hope is fading. The Empire is about to finish building the greatest weapon the galaxy has ever seen—the Death Star. The rebels’ only chance to defeat it now lies in the unlikely hands of a princess, a scoundrel, and a farm boy. . . .