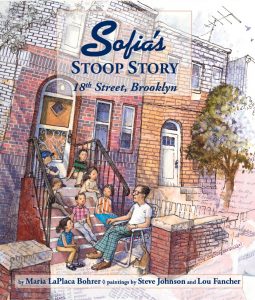 On a stoop in Brooklyn, in the 1960s, Uncle Frankie begins telling Sofia and her cousins a story about the day he met Dodgers baseball player, Carl Furillo. Meanwhile, Sofia’s Nana is next door, preparing the Italian family’s Sunday dinner. Nana calls Sofia and sends her on errands to buy cheese, bread, and cannoli. Sofia returns to the stoop, only to discover that Uncle Frankie’s story is over, and it’s time to eat. When Uncle Frankie realizes Sofia is upset because she only heard bits and pieces of his story, he shares his historic tale from beginning to end, and he gives Sofia a keepsake that he’s saved since 1947.