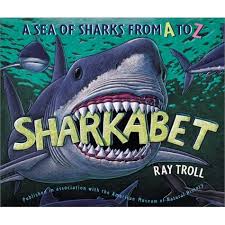 Sharkabet: A Sea of Sharks from A to Z

A thrilling, chilling book for children of all ages. Featuring Ray Troll’s spectacular fishy art, this book portrays sharks both living and extinct.

“An extraordinary alphabet of chondrichthyans from angel sharks to zebra sharks with a nifty intermingling of current and extinct species. In an introductory segment, Troll states that to make things “simpler” he is calling “all of the chondrichthyans sharks.” This arbitrary personal classification allows him to include such non-sharks as rays, guitarfish and chimaeras in his alphabet soup, sadly to the detriment of scientific purity. Two pages of “Amazing Shark Facts” precede his “Shark Field Guide,” which carefully points out the non-sharks in his lineup, presenting data on size, color, range, status, and fascinating “general remarks,” all of which provide enough information for the merely curious and a sturdy launching platform for further investigations. However, the book’s greatest asset is the brilliant art bursting from the pages like jewels. Often whimsical (nurse sharks are shown gliding about a patient in a hospital bed) or very dramatic (an extinct megalodon attacking a pod of prehistoric cetaceans), the images glow on the pages like mixed-media gems.” –School Library Journal

“”Did you know there are more than 400 different kinds of sharks?” In this distinctive and beautifully illustrated shark alphabet book, published in association with the American Museum of Natural History, Troll celebrates the shark’s diverse family tree. With concise text and exceptionally detailed pastel-like illustrations, he matches a species to each letter. For readers who see sharks as dangerous and repellent, Troll offers a new and more accurate perspective. For those who already know and respect the wonder of these creatures’ existence after over 400 million years, Troll offers visuals and facts to reinforce their respect and awe. Attractive and packed with information, Sharkabet will not disappoint.” –Booklist