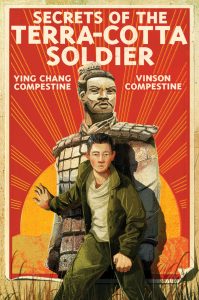 Secrets of the Terra-Cotta Soldier

In this action-packed adventure and coming-of-age story that finely weaves fact and fiction, thirteen-year-old Ming lives in a small village in Maoist China in the 1970s. His father is convinced that Emperor Qin’s tomb—and the life-size terra-cotta army created to serve and protect the emperor in the afterlife—lies hidden in the hills around them. But if Ming’s father doesn’t prove it soon, the town’s Political Officer will condemn him to the brutal labor camps.