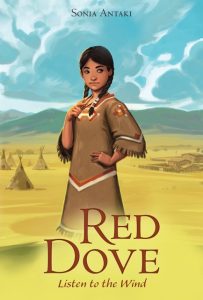 Red Dove Listen to the Wind

Red Dove, Listen to the Wind is a 50,000-word middle grade historical novel set in the Dakota Territory of the 1890s, against the backdrop of Wounded Knee. It is the tale of a young girl caught between worlds, and the value of empathy.

Abandoned by her white father, thirteen-year-old Red Dove faces another lean winter with her Lakota family on the Great Plains, now empty of the buffalo that once sustained them. Willful and proud, she is presented with a stark choice: leave her people to live in the white world—or stay, and watch them starve. When she breaks a sacred tradition and eats the fruit of the Dead Man’s Plum Bush, her wise old grandfather gives her a medicine pouch that allows her to enter the thoughts and feelings of others—and truly listen. With it, she confronts the cruelties of the nun who runs the school, and the horrors of the massacre at Wounded Knee. Accompanied by her beloved pony, she begins a journey to find her true place in the world—and learns that her greatest power comes from within herself.