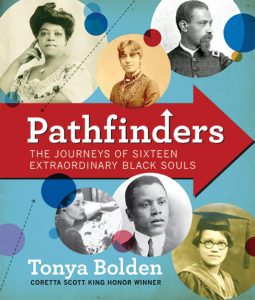 Over the centuries, untold numbers of black men and women in America have achieved great things against the odds. Pathfinders is a collective biography of sixteen diverse American men and women of African descent who made their mark on American history in the 18th to 20th centuries. People who dared to dream, take risks, and create goals not only for themselves, but for others and the betterment of their society, too. Award-winning author Tonya Bolden offers an insightful look at these figures, from Venture Smith, who bought his freedom; to Sadie Alexander, who contributed to the Civil Rights movement in the United States; to Katherine Johnson, who helped the United States land on the moon.

Among the incredible people in this nonfiction masterpiece are James Forten (1766–1842), a powder boy then prisoner of war during the Revolution, who grew up to be the captain of his own ship and one of Philadelphia’s leading abolitionists and wealthiest citizen; Richard Potter (1783-1835), an accomplished magician, ventriloquist, and hypnotist who paved the way for other well-known entertainers like Harry Houdini; Paul Revere Williams (1894–1980), born poor and an orphan by age four, who became known as the “Architect to the Stars” (among them Danny Thomas); Jackie Ormes (1911–1985), who first made her mark as a cartoonist in the 1930s; and Katherine Johnson (1918), a mathematician and physicist whose calculations were key to the successful missions of astronauts Alan Shepard, John Glenn, and Neil Armstrong. Each evocative profile includes an enlightening look at the historical build up and several images ranging from paintings and photographs to primary documents. The book ends with endnotes, a timeline, a bibliography, and an index. Ideal for Black History Month and common core usage, this book will also find wide appeal year-round for curious minds looking to discover fascinating pieces of American History, as well as interesting career possibilities.