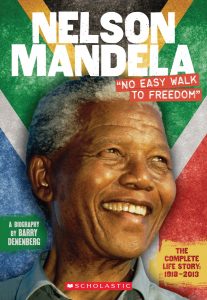 From his humble beginnings in rural South Africa to his tragic death at age 95 in 2013, Nelson Mandela’s life is a tale of inspiration and courage. The most up-to-date biography of Nelson Mandela.

This powerful biography provides an in-depth look at Nelson Mandela who grew up in a rural village in South Africa under racist apartheid rule–a regime he ultimately helped overthrow.

Denenberg explores the history of South Africa and its often violent struggle for civil rights, while tracing Mandela’s role in that history. Lawyer, leader of the African National Congress, political prisoner who spent 26 years in jail, president–no one else has had such enormous influence on his fellow South Africans. Even beyond South Africa Nelson Mandela influenced freedom fighters everywhere.