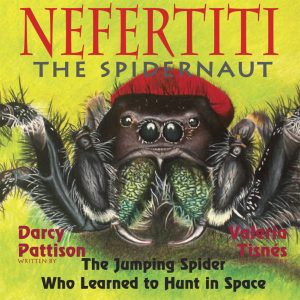 Nefertiti, The Spidernaut: The Jumping Spider who Learned to Hunt in Space

Most spiders spin a web and passively wait for prey to come to them. Jumping spiders, by contrast, actively hunt by jumping to catch their food. What if a jumping spider was sent to the International Space Station? When it jumped, it would simply float. No one knew if the spider could hunt in a weightless environment.

This nonfiction picture book for elementary kids chronicles the amazing voyage of Nefertiti, the Spidernaut to the International Space Station and back. She’s a Phiddipus johnsonii, or Johnson jumping spider, native to western United States. Her colorful anatomy—red, black and teal—made for stunning photography and video. In 2012, Nefertitti clocked a record-breaking 100 days in space, during which time she circled Earth about 1584 times, traveling about 41,580,000 miles.

Astronaut Sunita Williams, Captain U.S. Navy said, “It was a suspense story for me as it happened. I didn’t know if she would survive when I unpacked her for the first time, or when I packed her up and sent her back home to Earth.”

This is an astonishing story of change: through the dark and cold, in spite of being weightless and isolated, this incredible spider adapted and learned to hunt. Against all odds, she survived to return to Earth, where she had to re-adapt to Earth’s gravity. Nefertiti’s story of survival brings hope that we, too, can adapt to a changing world.

Join Nefertiti in this inspiring journey into space.