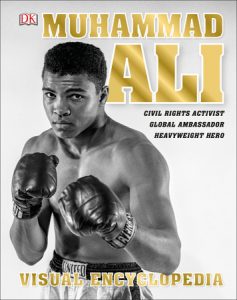 A comprehensive look at the life of one the greatest sports superstars of the 20th Century, Muhammad Ali–boxer, anti-Vietnam War activist, civil rights campaigner, advocate for Parkinson’s sufferers, and recipient of the Presidential Medal of Freedom.

From a humble upbringing in segregated Louisville, Kentucky, Cassius Marcellus Clay Jr. went on to become Muhammad Ali, Olympic gold medalist, three-time heavyweight boxing champion of the world, and in his own words “the greatest.”

More than 150 iconic photographs chart Ali’s life and rise to boxing stardom and showcase 60 key bouts that made his name, including the “Fight of the Century” against Joe Frazier, the “Rumble in the Jungle” with George Foreman, and the “Thrilla in Manila,” his third and final match against Frazier.

Data panels throughout give key facts at a glance, while quote boxes highlight Ali’s well-known phrases, such as “Float like a butterfly, sting like a bee.”

Key influencers in his career, including Don King and Howard Cosell, are featured.

The book also shines a light on Ali’s continuing impact after his death in 2016, and how his message of hard work and perseverance continues to inspire people around the world.