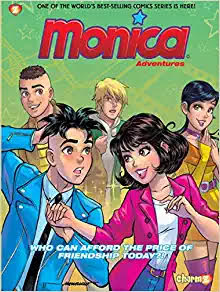 Meet Monica, a former bossy girl with a big personality who is adjusting to becoming a teenager. She’s been the leader of her group of friends since childhood, and there were few problems she couldn’t solve by simply bashing her buddies with her plush bunny rabbit, Samson. Now everything’s changing. Things have gotten more complicated. Her friends are still her friends, but it’s different now, especially her relationship with J-Five. Before they were rivals, battling each other to be the leader of their group. Now he’s grown more confident and has outgrown his childhood lisp…except when he’s around Monica. Why is he so nervous around her now? Perhaps getting the gang together to see a movie will get everything back to normal, but everything’s so expensive now, can Monica and her friends even manage to do that? If only she could still solve her problems using Samson.