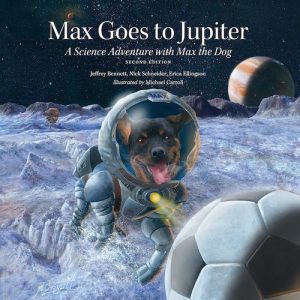 Max Goes to Jupiter is part of the award-winning series of “Science Adventures with Max the Dog” which was selected as the first set of books to be read by astronauts from the International Space Station for Story Time From Space (www.storytimefromspace.com). The new Second Edition is fully updated with the latest scientific discoveries about Jupiter, including results from the Juno mission. Kids, parents, and educators all love this series, in which a fictional story in Picture Book format is used to support learning of crucial concepts in science. The story and illustrations will engage kids of all ages, while the “Big Kid Box” sidebars explain the science behind the story. In Max Goes to Jupiter, the child hero of the first two books in the series, a girl named Tori, is now grown up and has become the chief scientists for the Jupiter Mission. To reach their spacecraft, Max and the crew (along with a few children) take a ride up an amazing Space Elevator — a concept that NASA is developing and might really be built in a decade or two. The spacecraft then takes them to Jupiter, where they drop a probe into the atmosphere and then land on two of Jupiter’s moons: the volcanically active moon Io and the ice-encrusted moon Europa. It is on Europa that Max becomes a hero once again, as he finds the spot where the crew can send a submarine through the ice and into the ocean below.