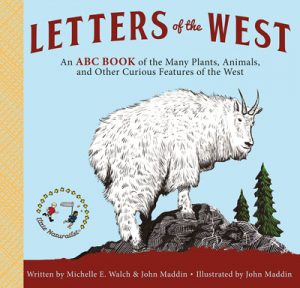 Letters of the West: An ABC Book of the Many Plants, Animals, and Other Curious Features of the West

by Michelle Walch and John Maddin

A is for Alpenglow, F is for Foxglove, X is for Xeriscape, and Z is for Zigzag! The wilderness of the West is captured in this alphabet book showcasing the grand and marvelous plants, animals, and curious features found from British Columbia to Baja, California. Filled with landscape marvels, Letters of the West invites young readers to learn their ABCs through delightfully bold and whimsical illustrations inspired by the natural world.