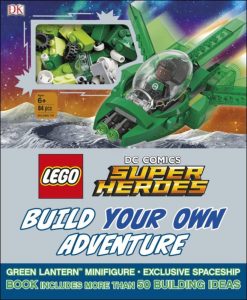 by DK and Daniel Lipkowitz

An inspirational building book for fans of the LEGO® DC Comics Super Heroes series that comes with an exclusive LEGO model.

LEGO® DC Comics Super Heroes: Build Your Own Adventure combines more than 50 ideas for building with enthralling story starters from the world of LEGO DC Comics world. Get inspired to build, then play out Super Heroes adventures of your own using your LEGO collection.

Organized into five locational chapters from Central City to Lex Luthor’s Base, each section features an opener that brings the models together in imaginative scenes and contains a selection of inspirational model ideas.

LEGO®  DC Comics Super Heroes: Build Your Own Adventure will get kids inspired to build and play out adventures of their own, and it comes with bricks and instructions to build an exclusive LEGO model to add to their collection.

LEGO, the LEGO logo, the Brick and Knob configurations and the Minifigure are trademarks of the LEGO Group. ©2016 The LEGO Group. All rights reserved.