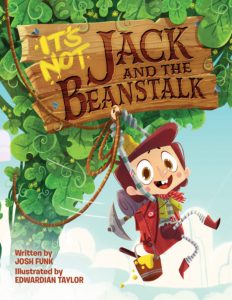 It’s Not Jack and the Beanstalk

Jack is not fond of the bossy narrator of his fairy tale! When Jack is told to trade his beloved cow Bessie for some magic beans, throw the beans out the window, climb the ENORMOUS beanstalk that sprouts overnight, and steal from a GIANT, he decides this fairy tale is getting out of control. In fact, he doesn’t want to follow the story line at all. Who says Jack needs to enter a life of daring, thievery, and giant trickery? He takes his story into his own hands—and you’ll never guess what happens next!