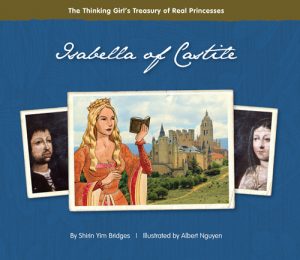 In a twist on the classic fairy tale, a princess in fifteenth century Spain refused to wait to be rescued by a prince but instead chose one for herself. Even then, she would not marry him until they’d reached an agreement that was revolutionary for her time—their marriage would be the equal partnership captured in the motto: To stand as high, as high to stand, Isabella and Ferdinand.

Richly illustrated and narrated with humor, this book tells the real and remarkable story of the princess, Isabella of Castile. The partnership that she made with her prince was a happy one, and without Isabella and Ferdinand, both Spain and America would not exist now as we know them.