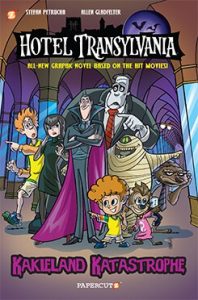 HOTEL TRANSYLVANIA is under attack–the owner of the nearby Kakieland theme park, the notorious Stephen Cling, has launch a viral anti-monster smear campaign claiming that monsters are scary! That keeps guests away from HOTEL TRANSYLVANIA and threatens the existence of the monsters’ beloved refuge. Drac, Frank, Murray, Wayne, Griffin, Blobby, as well as Mavis, Johnny, Dennis, and Winnie, must find a way to win back the public’s trust and save HOTEL TRANSYLVANIA or else they’ll be forced to return to the Bad Old Days when monsters were feared and shunned.