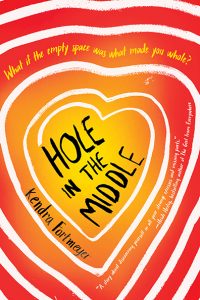 Hole in the Middle

Morgan Stone was born with a hole in her middle: a perfectly smooth, sealed, fist-sized chunk of nothing near her belly button. After seventeen years of hiding behind lumpy sweaters and a smart mouth, she’s fed up with keeping her secret. On the dance floor one night, she decides to bare all.

At first she feels liberated . . . until a few online photos snowball into a media frenzy. Now Morgan is desperate to return to her own strange version of normal—when only her doctors, her divorced parents, and her best friend, Caro, knew the truth. But tragically Morgan’s newfound openness and Internet celebrity seem to push those closest to her further and further away.

Then a new doctor appears with a boy who may be both Morgan’s cure and her destiny. What happens when you meet the person who is—literally—your perfect match? Is being whole really all it’s cracked up to be?