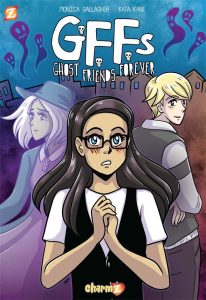 Magic is the only thing that will help Sophia Greene-Campos reunite with Whitney, her ghost girl crush who died in the 1990s.Frustrated, Sophia turns to the one group that she knows she can learn from – Spectreville High’s Wiccans & Witchcraft Club. Technically the club is only allowed to study magic and not actually practice it, but Sophia befriends a witch named Charlotte who shows her they don’t all follow school rules. While Sophia is busy disobeying her parents, her ex-boyfriend Jake is struggling between expressing his romantic feelings for her and helping her to get Whitney back. And Felix is suffering the nightmarish after effects of creating a Banishment Portal at such a young age. In order to help him, Joanne and Oscar might be forced to reveal more of their knowledge about portals, two-headed poltergeists, and other secrets about The Paranormal Incident that split the family.