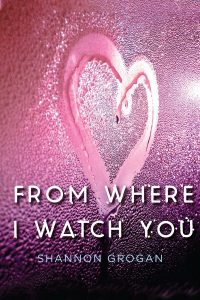 From Where I Watch You

Sixteen-year-old Kara is about to realize her dream of becoming a professional baker. Beautifully designed and piped, her cookies are masterpieces, but also her ticket out of rainy Seattle—if she wins the upcoming national baking competition and its scholarship prize to culinary school in California. Kara can no longer stand the home where her family lived, laughed, and ultimately imploded after her mean-spirited big sister Kellen died in a drowning accident. Kara’s dad has since fled, and her mom has turned from a high-powered attorney into a nutty holy-rolling Christian fundamentalist peddling “Soul Soup” in the family café. All Kara has left are memories of better times.

But the past holds many secrets, and they come to light as Kara faces an anonymous terror: Someone is leaving her handwritten notes. Someone who knows exactly where she is and what she’s doing. As the notes lead her to piece together the events that preceded Kellen’s terrible, life-changing betrayal years before, she starts to catch glimpses of her dead sister: an unwelcome ghost in filthy Ugg boots. If Kara doesn’t figure out who her stalker is, and soon, she could lose everything. Her chance of escape. The boy she’s beginning to love and trust. Even her life.