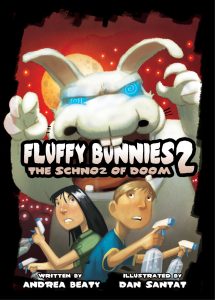 Fluffy Bunnies 2: The Schnoz of Doom

When film-loving twins Joules and Kevin Rockman left their summer camp, they thought their days of fighting evil bunnies from outer space were over. Surely there won’t be giant rabbits bent on world domination at their school, right? Wrong. Luckily, these bunnies aren’t FLUFFS (Fierce, Large, Ugly, and Ferocious Furballs)—sugar-addicted giant rabbits out to hypnotize and kill. Unluckily, they’re worse: the FOOFS (Fierce, Obnoxious, Odoriferous Furballs)—seemingly normal-size rabbits (with extra-large noses) out to take over the world! Can Joules and Kevin save themselves, and their school, from the Schnoz of Doom?
Seriously funny New York Times bestselling author Andrea Beaty raises the stakes in this sequel to her zany, pulpy sci-fi farce. And, not to use Famous Last Words, but with illustrations by the great Dan Santat (The Guild of Geniuses, Sidekicks), what could possibly go wrong?