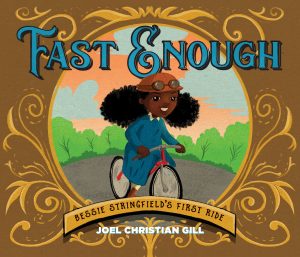 Have you ever been told that you’re not enough? That you’re not strong enough, tall enough, fast enough? Bessie was told she was not enough. Bessie dreams of riding her bike with the boys after school, but they tell her she is not fast enough. When she finally gets a chance to race, she proves not only that she is fast enough, but she is faster. Fast Enough combines an imagined story of Bessie Stringfield as a young girl with historical facts about Bessie as an adult. Bessie Stringfield went on to become the first African-American woman to travel solo across the United States on a motorcycle. Not only was she fast, but she was a true adventurer, daring to ride to places unsafe for African Americans in the 1930s and ’40s.Fast Enough is an inspirational story for anyone who’s been told they are not enough.