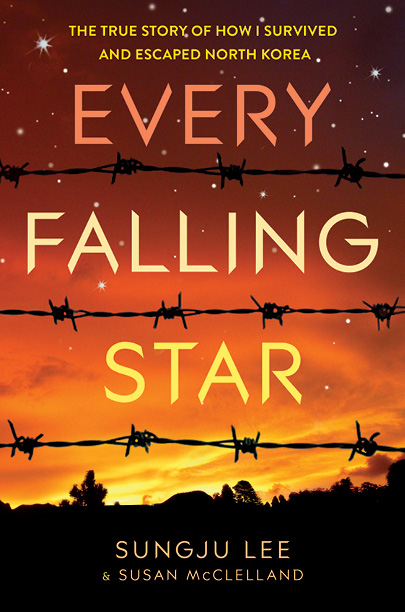 by Sungju Lee and Susan McClelland

Every Falling Star, the first book to portray contemporary North Korea to a young audience, is the intense memoir of a North Korean boy named Sungju who was forced at age twelve to live on the streets and fend for himself. With the land succumbing to famine, his father and, later, his mother depart to seek food. Neither returns, leaving him alone. In order to survive, Sungju joins a gang and lives by stealing, fighting, begging, and finding shelter in railway stations.

Sungju richly recreates the story’s scabrous environment, but more importantly he depicts the thrills and catastrophes of an abandoned boy as he confronts on a daily basis fearsome obstacles that often mean life or death. But what he does not know–and what saves his life–is that for years his grandfather has been traveling every Sunday to railway terminals, searching the haggard faces of street children, looking for his lost grandson.

Five years after his father’s disappearance, Sungju is reunited with his grandfather. Sungju at first takes the old man as prey, someone from whom he could steal, and only when he is shown his parents’ wedding photo does Sungju believe he has come home. The story concludes with him being smuggled out of the country to South Korea, where he is reunited with his father.