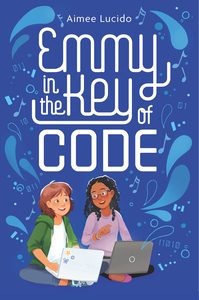 Emmy in the Key of Code

In this innovative middle grade novel, coding and music take center stage as new girl Emmy tries to find her place in a new school. Perfect for fans of GIRLS WHO CODE series and THE CROSSOVER.

In a new city, at a new school, twelve-year-old Emmy has never felt more out of tune. Things start to look up when she takes her first coding class, unexpectedly connecting with the material—and Abigail, a new friend—through a shared language: music. But when Emmy gets bad news about their computer teacher, and finds out Abigail isn’t being entirely honest about their friendship, she feels like her new life is screeching to a halt. Despite these obstacles, Emmy is determined to prove one thing: that, for the first time ever, she isn’t a wrong note, but a musician in the world’s most beautiful symphony.