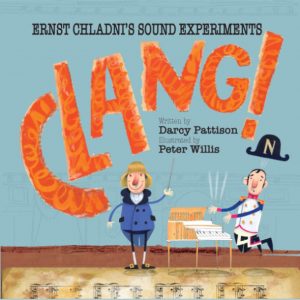 NSTA: A sound representation of sound! Takes the, sometimes hard to grasp, concept of sound and sound waves and makes it fun to learn.

Elementary Science – Sound and Sound Waves
What if your science experiments were so interesting that even an Emperor wanted to know more?

He made wires, columns of air, and solids vibrate. He wrote about this in his native German language, but his French scientist friends wanted to read about it in French. How could he get the cash he needed to write his new book?

In February 1809, Chladni’s friends took him to the Tuliere Palace. This elementary science picture book dramatizes the exciting meeting between a German scientist and French Emperor Napoleon Bonaparte.

Like Bill Nye, the Science Guy today, Chladni popularized science. But during his work as an entertainer, he struggled to find the time and finances do actual research. This story provides a glimpse at the life of Ernst Chladni, the Father of Acoustics. It’s an amazing example of how scientists collaborate internationally. The story is based on Chladni’s own description of the event.