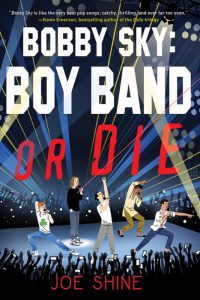 Robert “Hutch” Hutchinson is out of luck. His charm and singing voice—and penchant for bursting into song at all the wrong times—can’t keep him out of trouble anymore. When he’s arrested (again), he’s given a choice: die in juvie or become a Shadow—the fearless, unstoppable, and top-secret guardian of a Future Important Person, or FIP.

With nothing to lose, Hutch accepts. After two grueling years at the Future Affairs Training and Education (FATE) Center, Hutch, now 16, can barely remember the boy he once was. Ready for anything, he expects to be plunged into a battle zone.

Instead, he learns that his FIP is someone named Ryo Enomoto: the soon-to-be front man of the boy band International. Worse, Hutch has to put his old talents to use. He must join the band and change his name to Bobby Sky. Is this for real? Has he really turned himself into a lethal killing machine . . . only to become a teen pop sensation?