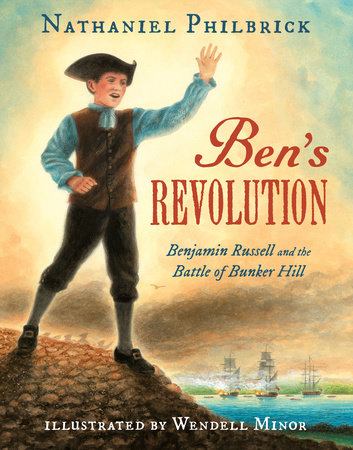 Ben’s Revolution: Benjamin Russell and the Battle of Bunker Hill

History comes alive in this gripping account of a young boy caught up in the start of the Revolutionary War. Based on an episode in National Book Award–winning author Nathaniel Philbrick’s New York Times bestseller Bunker Hill: A City, A Siege, A Revolution, this engrossing story allows readers to experience history from a child’s perspective, and Wendell Minor’s stunning paintings will transport readers back to the early days of the Revolutionary War.

Benjamin Russell is in school on the morning of April 19th, 1775, when his teacher announces, “The war’s begun, and you may run!” Ben knew this day was coming; after all, tensions had been mounting between the colonists and the British troops ever since the Boston Tea Party. And now they have finally reached the breaking point. Ben and his friends excitedly rush out of their classroom to bear witness, and follow the throngs of redcoats marching out of Boston toward Concord. Much to Ben’s surprise, Boston is sealed off later that day—leaving the boys stuck outside the city, in the middle of a war, with no way to reach their families. But Ben isn’t worried—he’s eager to help the Patriots! He soon becomes a clerk to the jovial Israel Putnam, a general in the provincial army. For months he watches the militia grow into an organized army, and when the Battle of Bunker Hill erupts, Ben is awed by the bravery of the Patriots, although saddened by the toll war takes. He later goes on to become an apprentice at a Revolutionary newspaper, and it’s a happy day when they get to report on the signing of the Declaration of Independence.