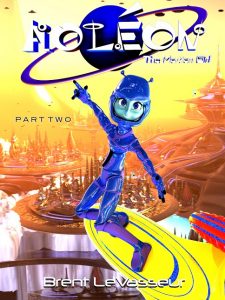 Aoleon The Martian Girl Part 2 – The Luminess of Mars

Aoléon and Gilbert are entrusted with a mission from PAX, leader of the Martian resistance movement. He wants them to investigate the Luminon of Mars whom he suspects is planning an invasion of Earth to steal its milk cows. Gilbert has an encounter with the Luminess (the mate of the Luminon) and discovers something strange about her. The undercover duo is chased by the Royal Paladin Guard. At Aoléon’s home, Gilbert meets Aoléon’s sister Una, mother Phobos and father Deimos as well as her overzealous pet, Zoot. He is also introduced to Bizwat, a covert operator and Procyon commando, who uses his Saturn Pizza delivery job as a cover. Gilbert then gets to visit Aoléon’s school, the Martian Space Academy, where he encounters Aoléon’s nemesis, Charm Lepton, and her friend Quarkina. While there, he attends a history lecture on the Martian people by Plutarch Xenocrates. After class, Gilbert and Aoléon experience intense training in zero-G, and Gilbert is treated to a psi-ball match between the Martian Space Academy and Martian Science Academy. Join Gilbert and Aoléon in this exciting middle-grade science fiction adventure book!