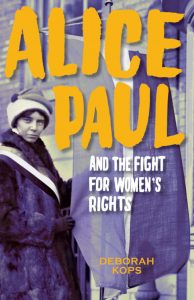 Alice Paul and the Fight for Women’s Rights

Here is the story of extraordinary leader Alice Paul, from the woman suffrage movement—the long struggle for votes for women—to the “second wave,” when women demanded full equality with men. Paul made a significant impact on both. She reignited the sleepy suffrage moment with dramatic demonstrations and provocative banners. After women won the vote in 1920, Paul wrote the Equal Rights Amendment (ERA), which would make all the laws that discriminated against women unconstitutional. Passage of the ERA became the rallying cry of a new movement of young women in the 1960s and ’70s. Paul saw another chance to advance women’s rights when the landmark Civil Rights Act of 1964 began moving through Congress. She set in motion the “sex amendment,” which remains a crucial legal tool for helping women fight discrimination in the workplace. Includes archival images, author’s note, bibliography, and source notes.