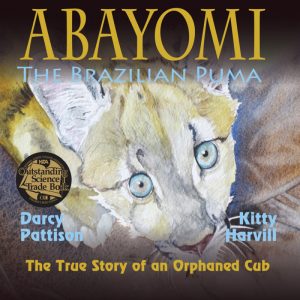 Abayomi, the Brazilian Puma: The True Story of an Orphaned Cub

To humans, pumas are invisible. Can scientists learn to be invisible to pumas?

Amidst the sugar cane fields of Brazil lies a chicken farm where a mother puma found easy prey to feed her cubs—until one fateful night. At 2:15 a.m. on a November morning, she was caught in a trap and died. Scientists searched for her cubs, but couldn’t find them. Twenty-three days later, dogs cornered one cub, staggering and dehydrated. They named him Abayomi, which means Happy Encounter in the native language. Now, the scientists must be invisible to the puma cub or he’ll never be able to return to the wild.