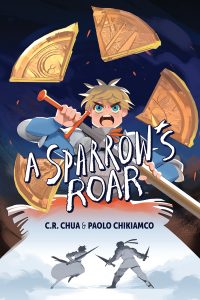 * Per of Esterpike is a standard knight-in-training; brave, hardworking, noble. Oh, and her sister Elena is the nation’s most beloved hero. No pressure. * Then Per is the only living witness to Elena’s death at the hands of a barbarian horde set on wiping Esterpike off the map, and someone has to carry word to the rest of Unity. This is a job for a hero; a job for Elena. But Per is all they have. * Together with Elena’s second-in-command Amelia, Per must impersonate her sister and travel to Unity’s capital to rally the people against the oncoming horde. But as Per moves forward on her quest, she comes upon a conspiracy that could undermine everything Per, and Elena, has ever fought for. * Join newcomers C.R. Chua (Adventure Time Comics) and Paolo Chikiamco on Per’s grand adventure all about strength, swords, and sisterhood.