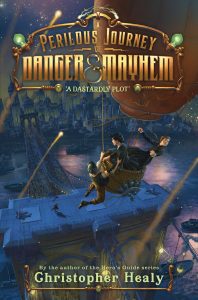 A Perilous Journey of Danger and Mayhem #1: A Dastardly Plot

A rip-roaring, hilarious alternate-history adventure starring the world’s most famous inventors—and its most forgotten. From the author of the beloved Hero’s Guide series, Christopher Healy.

It’s 1883—the Age of Invention! A time when great men like Thomas Edison, Alexander Graham Bell, Nicola Tesla, and George Eastman work to turn the country into a land of limitless opportunity.

And it all happens at the world famous Inventor’s Guild headquarters in New York City—a place where a great idea, a lot of hard work, and a little bit of luck can find you rubbing elbows with these gods of industry who will usher humanity into the future.

Unless, of course, you’re a woman.

Molly Pepper, daughter of brilliant but unknown inventor Cassandra Pepper, lives with her mother in New York. By day, they make ends meet running a pickle shop; but by night, they toil and dream of Cassandra taking her place among the most famous inventors in America.

In an attempt to find a way to exhibit Cass’s work at the World’s Fair, they break into the Inventor’s Guild, where they discover a mysterious plot to destroy New York.

The evidence points to the involvement of one of the world’s most famous inventors, and now it’s up to Molly, Cassandra, and a shop hand named Emmett Lee to uncover the truth—even if no one will ever know it was they who did it.