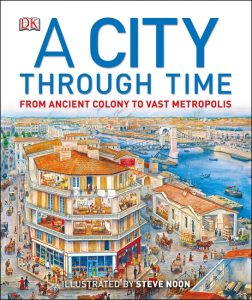 A City Through Time

In the bestselling A City Through Time, readers are invited to follow the progress of an imaginary city through six key periods of time, each captured by a scene of the city and zooming in on key buildings like a Roman bathhouse, medieval castle, and a modern skyscraper. Illustrations by award-winning artist Steve Noon provide a unique history of city life, transporting readers from an early Greek settlement to an industrial metropolis, while pull-outs surrounding the illustrations introduce the reader to the people who lived there, from Greek slaves to modern-day commuters.

New to this edition is a photographic section exploring amazing real-life cities — from ancient Babylon to Constantinople to 21st-century Tokyo.