Reading of Juneteenth for Mazie in Galveston 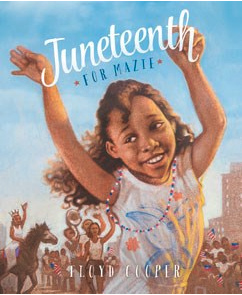 “The Ashton Villa in Galveston, Texas – the place where Juneteenth happened – is only sixty miles from my house! There’s a picture of that place, built by slaves, in Floyd’s book. I took a chance and called the Galveston Historical Foundation to see if they would give me special permission to read Juneteenth For Mazie on the front lawn of that famous property. They said yes.

“I immediately sent out a call for help on the family text-line, asking everyone to meet me in Galveston at the Ashton Villa. They all came to help honor Floyd. My godson, Kevin Washington, volunteered to reenact the reading of General Order Number 3 by Major Union General, Gordon Granger, freeing all slaves. It all came together so quickly! For me and my family, being at the Ashton Villa brought a greater understanding and deeper gratitude for June 19th, as we stood free in the same place where freedom was first announced in Texas.”

Watch the very moving video produced by Crystal, her family, friends, and KidLitTV.