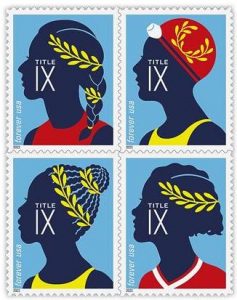 This is the first in a year-long blog series about a revolutionary advancement in our society and some famous people, unknown heroes, and children’s books about the topic. We will have guest blog posts from around the children’s book world with personal views of the effects of Title IX across the years.

The anniversary is also being marked by a new stamp issued by the USPS – seen here – and we’ve used 500 of them on our Children’s Book Week poster mailings.

It is appropriate that we launch this series just as the Women’s NCAA tournament is being held at the same time as the men’s for the first time, and as women’s professional soccer reached a landmark equal pay settlement. However, it must be noted that pay for WNBA players is so meager compared to the men that the women must play overseas in the offseason, and that Brittney Griner is being held in detention in Russia, where many women pros must go to play.

We’ll come back to the present in future blogs, but today, let’s talk about Dr. Donnis Thompson, a pioneer in women’s sports. She was instrumental in the passing of Title IX, a federal civil rights law passed in 1972 as part of a major update to the Civil Rights Act of 1964. It prohibited sex-based discrimination in any school or other education program that receives funding from the federal government. While intended with wide consequences, it’s become mostly attached to a radical overhaul to college athletics.

In brief, the law mandated that there must be equal support of women’s athletics as men’s, and that’s where Dr. Thompson comes in.

In 1961, Thompson started the Rainbow Wahine sports program at the University of Hawai’i by forming a track and field team. However, she struggled with the unequal treatment of female athletes and her own low salary compared to male coaches. But she persisted. Thompson worked with Hawai’i Congresswoman Patsy Takemoto Mink, the first Asian-American elected to Congress, to write the legislation that became Title IX fifty years ago this year.

In the 1980s, Dr. Thompson was named an administrator of the World Games in Mexico City and a superintendent of the Hawaii Department of Education, the first African American woman to do so. In 1991, she received the Dr. Martin Luther King, Jr. Outstanding Service Award.

Generations of women owe their equal opportunity to compete just as men do to Dr. Donnis Thompson, but there are more miles to go. Here are two wonderful children’s books about Title IX and further reading.

Let Me Play: The Story of Title IX: The Law That Changed the Future of Girls in America, by Karen Blumenthal (Atheneum Books for Young Readers. ISBN. 9780689859571)

No One Would Hire Her. So She Wrote Title IX and Changed History for Millions of Women. Meet Education Trailblazer Patsy Mink – The 74