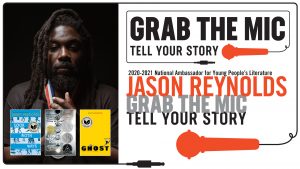 “I want to let [the young people of this country] know how proud I am, and to encourage them—even in the midst of this plot twist—to continue to press on with their beautiful stories.”

New York, NY, April 1, 2021—Jason Reynolds, the National Ambassador for Young People’s Literature, will embark on his second two-week virtual tour this spring, connecting with middle school and high school students in underserved communities. In support of the Ambassadorship tour, The Library of Congress has purchased paperback copies of Reynolds’s Look Both Ways: A Tale Told in Ten Blocks for participating schools, with the generous support of Dollar General Literacy Foundation.

In April 2021, Reynolds will do eight virtual appearances, where he will connect with students from twelve middle schools and high schools. Each selected school will receive a 45-minute virtual event, during which Reynolds will discuss his role as Ambassador with an educator/professional at each school and will also converse with two student “ambassadors.” The participating schools below were selected from more than 200 proposals received in January 2021.

For his second virtual tour, Reynolds said, “If there’s one thing I’ve learned throughout this last year, it’s the power of persistence. And the teachers of this lesson have been the same teachers who’ve taught me most things—the young people of this country. Their persistence during such a relentless time has been incredible, and there’s nothing I want to do more than to show up for them. I want to let them know how proud I am, and to encourage them—even in the midst of this plot twist—to continue to press on with their beautiful stories.”

Meeting with young people at home during the pandemic is nothing new to Jason Reynolds, who embarked on his first virtual school tour in December of 2020; he conversed with students in Rantoul, IL; Leland, MS; Denham Springs, LA; Pine Ridge, SD; Gillette, WY; Beckley, WV; and Swansea, SC. Reynolds also launched two video series last year. In April 2020, in coordination with the Library of Congress, he debuted “Write. Right. Rite.”—a 30-part video series for kids hosted at guides.loc.gov/jason-reynolds/grab-the-mic offering fun and engaging prompts to express creativity—as well as a monthly newsletter for parents and educators focused on relevant topics of the day. In March 2020, Reynolds also launched “Brain Yoga,” a weekly Instagram Live video series during which he invited young people to join him onscreen to participate in a game that stretched the imagination, for a chance to win a gift card to a local independent bookstore of choice. Reynolds personally gifted thousands of dollars in support of bookstores across the country.

Schools everywhere are invited to visit the Every Child a Reader website (everychildareader.net/ambassador/) to download Reynolds’s “GRAB THE MIC: Tell Your Story” Educator Guides, for activities that educators can implement in the classroom (in-person or virtual) to encourage students to celebrate their personal stories.

Reynolds is the author of more than a dozen books for young people, including Look Both Ways: A Tale Told in Ten Blocks, a National Book Award finalist that was named a Best Book of 2019 by NPR, The New York Times, The Washington Post and TIME. A native of Washington, D.C., Reynolds began writing poetry at age nine and is the recipient of a Newbery Honor, a Printz Honor, an NAACP Image Award and multiple Coretta Scott King Award honors. His most recent book (with Ibram X. Kendi), Stamped: Racism, Antiracism, and You, was a #1 New York Times bestseller.

About the National Ambassador for Young People’s Literature

The National Ambassador for Young People’s Literature is appointed by the Librarian of Congress and is an initiative of the Library of Congress, in partnership with Every Child a Reader and the Children’s Book Council, with generous support from Dollar General Literacy Foundation.