Honoring beloved Sam McBratney, author of Guess How Much I Love You 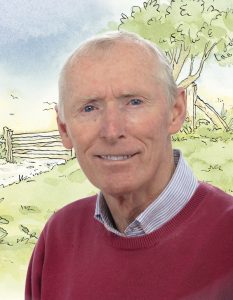 Somerville, MA –Sam McBratney, beloved author of Guess How Much I Love You, passed away on September 18, 2020. He was seventy-seven years old. Born in Belfast, Northern Ireland, and a graduate of Trinity College Dublin, McBratney was a classroom teacher before becoming a full-time author. He wrote more than fifty books, including several best-selling and award-winning titles, but he achieved international acclaim with the 1994 publication of Guess How Much I Love You, which features a spirited yet tender bedtime competition between two nutbrown hares and the now iconic illustrations of Anita Jeram. Now considered a children’s book classic, Guess How Much I Love You has sold over fifty million copies worldwide, been translated into fifty-seven languages, and serves as the cornerstone of a global licensing program. The phrase “I love you to the moon and back” has itself taken on iconic stature, and the book is considered an essential title for any nursery, preschool, or library bookshelf. But to its author, at its heart the book was always “a lighthearted little story designed to help a big one and a wee one enjoy the pleasure of being together.”

A charming man who met friends new and old with a twinkle in his eye, McBratney loved touring to support his books and built a lifetime of fond memories and meaningful connections with readers, booksellers, and librarians by traveling throughout Europe, Asia, Australia, and the United States. He is survived by Maralyn, his wife of fifty-six years, three children, and six grandchildren—as well as generations of readers whose hearts and minds he touched with his books.

McBratney’s highly anticipated companion to Guess How Much I Love You, titled Will You Be My Friend?, comes out this month, with a global publishing date of September 29. On crafting a sequel to one of the most beloved books of all time, McBratney said, “When writing about the hares, I aim to describe moments of emotional significance but with loads of humor and the lightest of touches. This story is about one of those moments. Little Nutbrown Hare’s world suddenly glows with the discovery of friendship.”

“Sam McBratney was a profoundly lovely human being. You could recognize his voice in a moment—he was an exceptionally talented wordsmith and always knew exactly what children would enjoy hearing the most. Amazingly humble, he also was a hilarious storyteller and convivial companion. We never had better days than when he would come down from Ireland to visit the offices in London. Our world dims with his passing, but his legacy of kindness and humor will burn bright and carry on across time and distance through his stories, which have touched the hearts of readers around the globe,” says Karen Lotz, group managing director of the Walker Books Group, which includes Candlewick Press in the United States.

“I feel such great sorrow at the passing of my dear friend Sam, but also an immense sense of pride, and privilege, to have worked for so long with such a master of his craft. Through the years, as Guess How Much I Love You achieved great success and acclaim, Sam never failed to express his profound surprise at the power of the message within his text. The joy he felt at knowing so many people around the globe connected with the gentle celebration of unconditional love was ever palpable. It is also the true mark of the man that he never failed to recognize the role that Anita Jeram’s exquisite illustrations play in the success of Guess How Much I Love You. They were a literary pairing of the highest caliber. Sam faced everything in life, and death, with such great, good grace and humor. He always smiled out at the world, and I feel so lucky to have felt the warmth of his smile,” says Donna Cassanova, character publisher of Walker Books.

ABOUT CANDLEWICK PRESS
Candlewick Press is an independent publisher based in Somerville, Massachusetts. For more than twenty-five years, Candlewick has published outstanding children’s books for readers of all ages, including books by award-winning authors and illustrators such as National Ambassador for Young People’s Literature emerita Kate DiCamillo, M. T. Anderson, Meg Medina, Jon Klassen, and Laura Amy Schlitz; the widely acclaimed Judy Moody, Mercy Watson, and ’Ology series; and favorites such as Guess How Much I Love You, Maisy, and Where’s Waldo? by Martin Handford. Candlewick is part of the Walker Books Group, together with Walker Books UK in London and Walker Books Australia. Visit Candlewick online at www.candlewick.com.