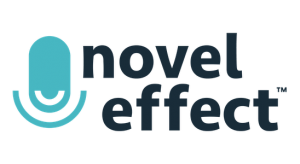 Seattle, WA – March 6, 2019 – Novel Effect, the groundbreaking voice-driven entertainment company, announced today the release of their Novel Effect: Read Aloud Books app for Google Play. This release brings their patent-pending reading platform, which plays background music and sound effects synced to a storyteller’s voice as a book is read aloud, to millions of additional parents and educators who use Android devices.

“Since expanding our development team this Fall, our top priority has been to deliver an Android version of our app to the thousands of moms, dad, teachers and librarians who have requested it,” said Melissa Hammersley, Co-Founder and Chief Design Officer. “We are excited to expand on our mission to bring people together using the power of voice through engaging, enhanced experiences that focus on books and reading aloud.”

In developing for Android, Novel Effect solicited feedback from its users for feature improvements and additions and integrated these features into both the Android version and an update of their flagship iOS app, also released today. In addition to the read-along experience users have come to know and love, they will now see:

The new Android and updated iOS releases also showcase a new branding initiative for Novel Effect, a move that signals their plans to expand their voice-driven technology into new entertainment categories in 2019.

“We had an exciting year on the development front in 2018, pushing the boundaries of our voice-driven technology,” said Matt Hammersley, Co-Founder and CEO. “As we look to debut new products for all age groups in 2019, we wanted to ensure our brand spoke to our progressive, approachable, and playful spirit.”


About Novel Effect
Seattle-based Novel Effect is the leader in voice-driven media and entertainment. Through the use of voice, Novel Effect’s products are able to blend physical and digital worlds to create immersive and interactive experiences across books, video and games. Founded in 2015, Novel Effect participated in the 2017 Alexa Accelerator, powered by Techstars, and has patent-pending technology that was featured on Shark Tank. Their flagship app of the same name has received numerous recognitions including a Webby, Cynopsis, Parents’ Choice and Mom’s Choice award. Learn more at www.noveleffect.com.