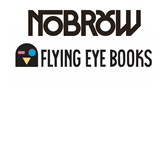 Flying Eye Books is thrilled to announce that DreamWorks Animation has optioned the motion picture rights to the Brownstone’s Mythical Collection series by Joe Todd-Stanton in a deal between the animation studio and the publishers.

Brownstone’s Mythical Collection follows the stories of the Brownstone family and their adventures through ancient mythologies. Two books have been published in the series so far. In Arthur and the Golden Rope (2016), unlikely hero Arthur journeys to the land of the Vikings where he meets Norse gods and monsters. In Marcy and the Riddle of the Sphinx (2017), an anxious Marcy travels to ancient Egypt to save her adventurer father and overcome her deepest fears. The next book in the series will be based on Chinese mythology and is publishing in Autumn 2019.

Todd-Stanton’s book The Secret of Black Rock won the 2018 Waterstones Children’s Book Prize in the UK, and Arthur and the Golden Rope—the first in the Brownstone series—was a Kirkus Best Book of 2017 and received a 2018 Eisner nomination for Best Publication for Early Readers (up to age 8). Upon hearing the DreamWorks news, Joe Todd-Stanton said: “Knowing this studio, which was such a huge and positive part of my childhood, have even read my book is mind-blowing. The fact they are interested in possibly adapting it is on another level. I’m really excited to see what happens. “

Sam Arthur, publisher and C.E.O. of Flying Eye Books commented “DreamWorks have a knack for picking up on great content—Joe Todd-Stanton’s star is rising!”