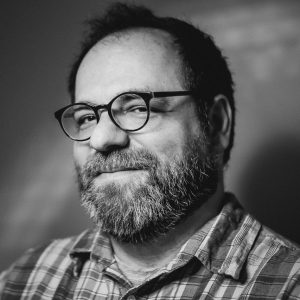 What is the most enjoyable part of drawing?

There are two moments in the process that feel most peaceful. The first is during the initial sketching, where anything can happen; this is the most liberating part of the whole endeavor, where mind, hand, and tool merge into one instrument. You can make as many mistakes as you want, pursue any direction, and not worry about blind alleys. There is no affectation in these first sketches, and you get as close to finding your own natural “handwriting” as possible. The second most enjoyable part is… finishing. There is no greater relief than putting the pen down and feeling a sense of accomplishment. Usually I don’t even like what I’ve drawn all that much, as I tend to fixate on the imperfections, but I’m glad it’s over. Typically, I have to go back and make additional corrections and tweaks. And because I have to scan my ink-on-paper drawings, the computer adds another level of refinement and OCD-indulgence. I suppose you’re not really finished until you see the drawing printed and there is truly no going back; it is irrevocably finished, and you just have to accept it and move forward from there. I find that to be a tremendous relief as well, and a spur to do better next time. There’s possibly a third moment that is my favorite, but it’s an elusive one. It happens in the middle of the process, usually, where you lose track of time. You’re simply lost in the act of drawing, almost as if you are a machine, or someone else has taken over the controls for a while. It’s impossible to be aware of not feeling self-conscious, which would defeat its own purpose, but you realize that you were operating in some sort of “zone” only when the spell is broken. The phone rings, or your cat spills ink on the drawing table, and life intrudes. The self-doubt begins again. But having experienced that sort of “weightlessness,” you know it’s possible to recapture it, and the only way to do that is just to move forward, stop overthinking, and keep drawing.

What do you look for in art?

I like anything that reminds me of how strange and rare it is to be alive, to possess a consciousness, to be able to move through time and space (or in my case, stumble through time and space). I suppose another way to phrase that is: anything that reminds us of our humanity, allows us to see ourselves from a different vantage point, to understand our place in the universe just a little better. That jolt of recognition can come from a book, a movie, a painting, an old candy package, anything. It can come from seeing an immaculate drawing by an Old Master or a messy one done by a child. It always arrives unexpectedly. The work can be autobiographical or fictional (perhaps there is no real difference), focused internally or externally, slice-of-life or fantastical, but I think artists of any and all stripes have a certain responsibility to cultivate their intelligence and sensitivity, and perhaps a similar thoughtfulness can thus be awoken in the viewer, reader, or spectator. In my case, this growing-up process took a while, and I think artists should be allowed some wiggle room to explore, stumble, and even fall once in a while, when it comes to improving their artwork. We’re all imperfect, and most of us are trying to do better. I can only speak for myself, though, and I might be completely naive.

Is there something that you feel is misunderstood about you (and your work)?

One can be forgiven for looking at my “career arc” (such as it is) and concluding that it indicates a severely split personality; I’ll admit there are some strange dichotomies at play. Having said that, to me it has felt like a progression and a continuum, however bumpy and confused. I think I was slowly moving toward a lightness. I’ve always been appalled by the capacity for cruelty that some human beings seem to possess, which is all so needless, and I used to believe that satire was the only way to fight that unfortunate human tendency. But satire rarely works in this manner; instead, I found myself preaching to the converted, at best, or being taken at face value, at worst. So, I’ve given up on satire and irony. Times have gotten worse, especially in the last few years, and maybe satire means nothing when the world is more absurd and twisted than one’s darkest visions ever could be. I really don’t want to add anything to the communal art-pile that can be misinterpreted or misused. I’m aiming for clarity now, and to contribute something for the greater good. Children’s comics can be a wonderful, ideal vehicle for that. I’ve really enjoyed meeting the librarians, teachers, and parents that read my children’s books and found them fun and useful, but my greatest satisfaction has come from seeing kids laugh and really get my jokes in the way they were intended; this has been deeply gratifying and, honestly, it gives me a little hope for myself. 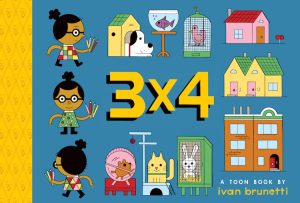 About Ivan Brunetti
Ivan Brunetti is an art teacher as well as an artist and a cartoonist. His drawings have appeared in The New Yorker, The New York Times Magazine, and McSweeney’s, among other publications. Ivan has published many acclaimed books for adults, including Cartooning: Philosophy and Practice. Wordplay, his first book for children, shows kids how to imagine compound words as the words that comprise them, making language fun instead of daunting. His second children’s book, 3×4, also encourages kids to visualize playfully–this time with numbers.