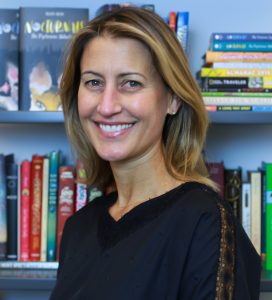 I don’t know that I could ever fully explain how much I love to read. One of my fantasy getaways is to rent a super luxurious hotel room in a winter location, order room service, and just read in bed all day. When I was a kid, I went to the library and borrowed ten books a week. I read during school, after school, and walking to and from school! Fiction was incredibly helpful to me during tricky parts of my childhood and adolescence, but it was also one of my greatest joys.

Do you have a favorite animal fantasy book from your own childhood, or from reading with your kids, that inspired you in your own writing?

I’m not sure I have favorite animal fantasy books as much as I have favorite books. Some of those favorites have animal protagonists, Charlotte’s Web (Of course! Who doesn’t love Charlotte’s Web?!), Mrs. Frisby and the Rats of NIMH, Fantastic Mr. Fox. Actually, Fantastic Mr. Fox and the rest of Roald Dahl’s books were inspirational to me in writing The Nocturnals. I love how well Dahl’s books read aloud. In fact I believe Dahl wrote them to entertain his children at bedtime. A goal in writing The Nocturnals was to create a narrative that read well silently, but even better out loud. That’s why the series has the conversational banter that is does.

What’s the best advice you have ever received about writing?

Hang a light on it. And it was from Susan Lurie, the editor of our series, The Nocturnals. She taught me to simply be overt about struggling with something that I have written that feels awkward.

Tracey Hecht has written, directed, and produced for film. Her first middle grade book The Nocturnals: The Mysterious Abductions, was an ABA Indie Next Pick. Tracey expanded The Nocturnals to include early reader books with Fabled Films Press. The newest Grow & Read early reader book, The Slithery Shakedown, is out in April.