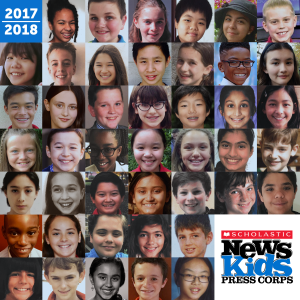 New York, NY – September 12, 2017 – Today, the award-winning Scholastic News Kids Press Corps™ welcomed 44 Kid Reporters, ages 10–14, to cover current events, breaking news, entertainment stories, and sporting events from across the country and around the world this school year. The 20 new and 24 returning Kid Reporters hail from the United States—representing 21 states and the District of Columbia—and from Australia, China, Hong Kong, India, Thailand, and the United Kingdom. Editors selected this year’s team after reviewing more than 400 Kid Reporter applications, a record-breaking number of entries.

The full list of 2017–18 Kid Reporters, along with their bios, can be viewed here: http://www.scholastic.com/kidspress.

“We were extremely impressed with the quality of the applications this year and are delighted to welcome these 44 young journalists to the Scholastic News Kids Press Corps,” said Suzanne McCabe, Editor of the Scholastic News Kids Press Corps. “By reporting age-appropriate, high-interest news stories, our Kid Reporters are helping their peers gain an appreciation for quality journalism and a broader understanding of the world so that they can become well-informed community members and voters of the future.”

The 2017–18 members of the Scholastic News Kids Press Corps are: