It’s Me Eloise: The Voice of Kay Thompson and the Art of Hilary Knight 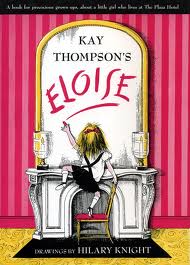 AMHERST, MA — Eloise has been called a force of nature: brazen, ill-mannered, and utterly appealing, the six-year-old terror of the Plaza Hotel. The girl Kay Thompson created in voice and Hilary Knight brought to life through illustration is at the heart of a new exhibition at The Eric Carle Museum of Picture Book Art, It’s Me Eloise: The Voice of Kay Thompson and the Art of Hilary Knight, on view February 12 through June 4, 2017.

The first major retrospective of Knight’s work showcases more than 90 objects, from numerous Eloise illustrations to art from the rest of his prodigious career as a children’s book artist, poster designer, magazine illustrator, and painter. Among the many treasures on display are Knight’s 1954 trial drawings for the first Eloise book, two Eloise in Paris sketchbooks, a magnificent suite of final art from Eloise In Moscow, and the 1993 Eloise watercolor for New York Is Book Country. There’s a kicker, too: for the first time since its infamous disappearance from the Plaza Hotel in 1960, Knight’s original 1956 Eloise portrait is also on view.

Exhibition curator Jane Bayard Curley says Knight “contributed a different DNA to Eloise.” He was influenced by his parents, who were both great artists, as well as illustrators Edmund Dulac and E. H. Shepard. Ronald Searle’s cartoon series Belle’s of St. Trinian’s, which followed boisterous girls through their boarding school days, helped Knight capture Eloise’s rambunctious spirit. However, it was his mother’s 1930 painting of a young girl that served as one of his greatest muses, while his father’s 1926 New Yorker cover inspired Eloise’s distinctive black, white, and pink color scheme. “Knight’s drawings not only pinned Thompson’s words to the page, they made Eloise accessible to children,” says Curley.

In addition to the Eloise franchise, Knight has showcased his pictorial skill in Hello, Mrs. Piggle-Wiggle (1957), The Christmas Nutshell Library (1963), Beauty and the Beast (1963), Where’s Wallace? (1964), and Sunday Morning (1968). He is not only a popular children’s book illustrator, but also a successful graphic designer, having created many memorable magazine illustrations, record covers, and posters for Broadway productions—further evidence of his multi-faceted career.

Knight’s filigree lines gave Eloise an unmistakable image, but it was Kay Thompson’s words that gave her a unique voice. Eloise was the author’s alter-ego, a comic riff with which she amused her friends. Curley says, “Eloise is Thompson whistling. Plot free and without a jot of punctuation, the books are comic performances caught between book covers.”  If Eloise has been called a force of nature, Thompson was the eye of the storm. In 1966, Knight created an illustration for Vanity Fair in which the iconic cover of the original Eloise book has been altered: the chair kicked out from under her, Eloise fallen to the floor, as the melodramatic Thompson writes “I AM ELOISE” on the mirror above the fireplace. Curley says, “[Kay] started in radio, and then moved to MGM, where she was the wizard of vocal coaching and arrangement.” She worked with stars Judy Garland, Frank Sinatra, and many more. Eventually, Thompson developed a cabaret act of her own. Curley writes that working with Thompson “was like dining with a panther: exciting but dangerous.” She was a determined, hard-working woman who knew what she wanted and was not afraid to go for it.

Eloise was born out of this world of performance. In fact, when Thompson first wrote Eloise, she targeted the story for an adult audience, namely “precocious grown-ups,” as the subtitle declares. Yet, her words and Knight’s drawings captured and held the attention of millions of children: The New York Times declared Eloise as “one of the most recognizable characters in children’s literature.” Eloise’s popularity remains as strong as ever. Whether Eloise is skipping through the hallways of the Plaza or travelling to Paris, her shenanigans and unerring confidence are unmistakable.

Knight knowingly warns, “[Eloise] is a free spirit and exceedingly nimble—just when you think she’s in the lobby, you hear from the elevator operator that she’s on the top floor. That’s Eloise.” But where can you find Eloise now? At The Carle, of course!

A 40-page illustrated catalog with an essay by curator Jane Bayard Curley is available in The Carle Bookshop.

Members Preview Reception: It’s Me, Eloise: The Voice of Kay Thompson and the Art of Hilary Knight

As a valued Museum Member, be the first to see this blockbuster exhibition before it opens to the public.

Members RSVP by Monday, February 6 to Jenny Darling Stasinos at (413) 559-6310 or membership@carlemuseum.org.

Celebrate The Carle’s special exhibition It’s Me, Eloise: The Voice of Kay Thompson and the Art of Hilary Knight with a day of programs all about Eloise.

Eric Carle and his wife, the late Barbara Carle, co-founded the Museum in November 2002. Carle is the renowned author and illustrator of more than 70 books, including the 1969 classic The Very Hungry Caterpillar. Since opening, the 40,000-square foot facility has served more than half a million visitors, including 30,000 schoolchildren. The Carle houses more than 13,000 objects, including 6,600 permanent collection illustrations. The Carle has three art galleries, an art studio, a theater, picture book and scholarly libraries, and educational programs for families, scholars, educators, and schoolchildren. Educational offerings include professional training for educators around the country and Master’s degree programs in children’s literature with Simmons College. Museum hours are Tuesday through Friday 10 a.m. to 4 p.m., Saturday 10 a.m. to 5 p.m., and Sunday 12 noon to 5 p.m. Open Mondays in July and August and during MA school vacation weeks. Admission is $9 for adults, $6 for children under 18, and $22.50 for a family of four. For further information and directions, call (413) 559-6300 or visit the Museum’s website at www.carlemuseum.org.