2017 Teen Choice Book of the Year: Nominate Your Favorites Now! 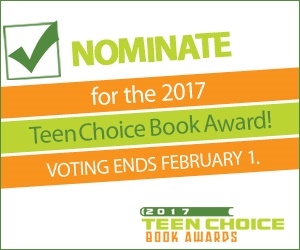 The five titles that get the most votes will become the finalists for the Teen Choice Book of the Year.

Just fill out the form on the Teenreads website by 11:59 PM (EST) on February 1, 2017. You can vote for titles that are on the provided list or write in your favorites if they aren’t listed. Just make sure your book was released in 2016!

The top five finalists will be announced at the end of February. Voting for the Teen Choice Book Award winner among those contenders will open March 1 and run through May 7, 2017.

About the Children’s and Teen Choice Book Awards

Launched in 2008, the Children’s and Teen Choice Book Awards are the only national book awards voted on only by kids and teens. In 2017, voting will be open from February 28 to May 7.